In case you’ve not heard of a joule thief before, they’re simple voltage boost circuits, usually used to drive light loads like LEDs with a single battery cell, even batteries that other electronic devices consider ‘dead’ can be used, [Wikipedia article].
I made 2 versions of the joule thief, the common one with a single transistor, resistor and a toroid coil as seen in the wikipedia article and another which uses 2 transistors, 3 resistors, a capacitor and an inductor which I found [Here].

Both versions work well, but there are differences between the two, the common version works down to a lower voltage, around 0.6V, but the less common one draws much less current, 12mA as opposed to 60mA at 1.3V and thus not as bright, but the difference is small.
In the common joule thief I used a 2N4401 transistor and 2N3904 transistors in the other joule thief. I’ll also try and workout their efficiencies sometime too. 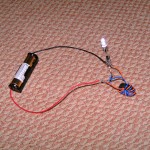 Many years ago (September 2009) I made a simple bench power supply using an LT1083 7.5A linear regulator with adjustable output voltage designed to be used with a 19.5V 3.42A laptop power supply. I...

My Samsung HT-C460 home cinema had started to go into protection mode – it would display “PROT” on its screen and turn off after a few seconds. It’s an old cinema system with a DVD player that hasn...