My Samsung HT-C460 home cinema had started to go into protection mode – it would display “PROT” on its screen and turn off after a few seconds. It’s an old cinema system with a DVD player that hasn’t been used in years (I only use it to feed the TV audio through), but I thought I’d try having a go at diagnosing, fixing and getting some more life out of it.

I opened it up and looked around for any blown components, like the usual bulging capacitors, but nothing looked out of the ordinary. I probed around the power supply and checked that the output voltages were correct, which were handily printed onto the PCBs, and found that the -5V rail was only outputting around -0.5V. That’s pretty sus. 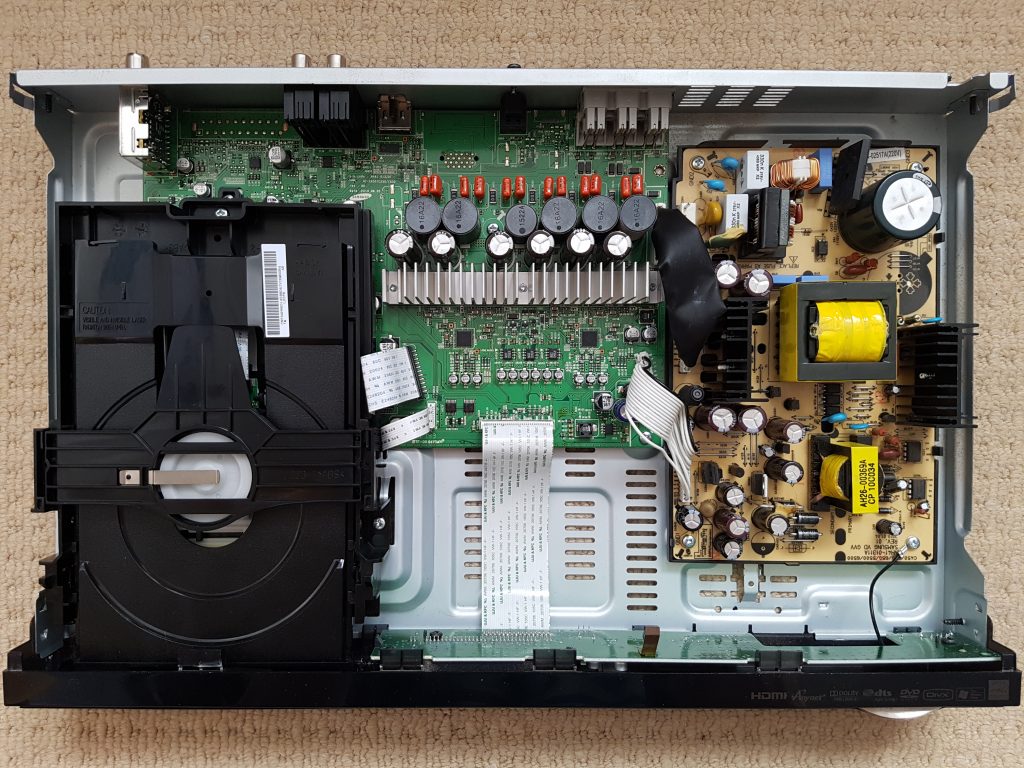 A bit of reversing engineering and probing around the power supply’s -5V rail resulted with this schematic and voltage readings: 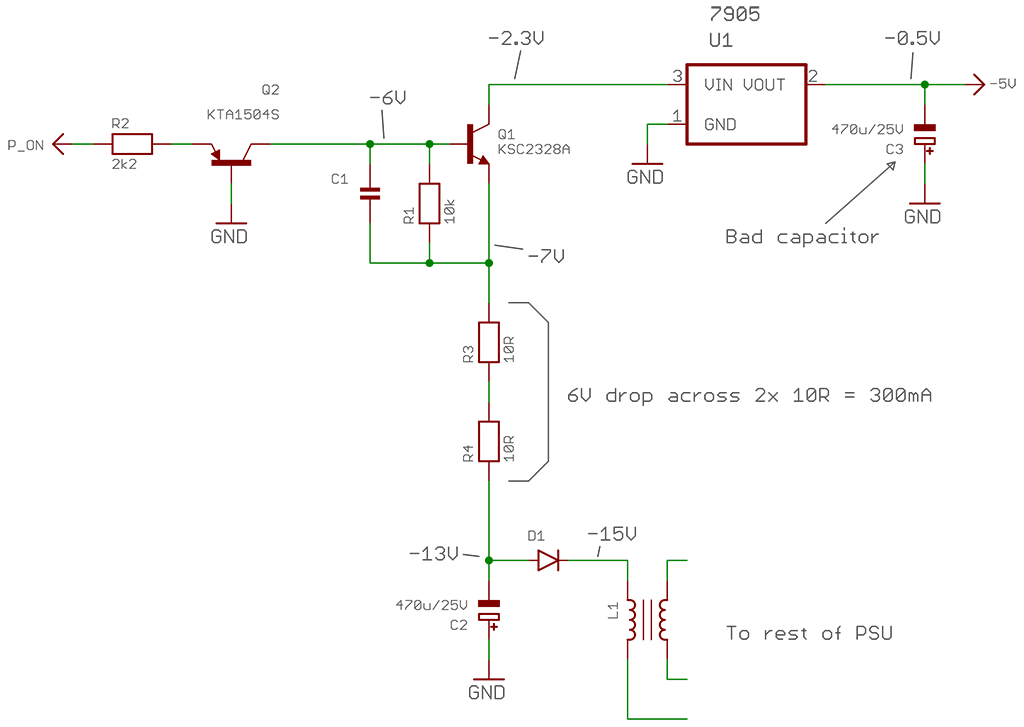 I later searched for the part number of the PSU board “AH41-01311A” and found the full schematic anyway, hah: 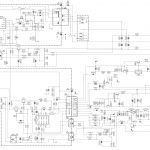 A drop of 6V across the two 10R resistors indicates a current draw of 300mA. It also means that each resistor was dissipating 900mW of power, which is far too much for their small 0805 packages. Something was drawing a lot more current than it should have been.

Since all of the capacitors appeared to be ok, I removed the 7905 -5V regulator and tested it thinking that it might have developed an internal short to ground, but it was working fine. With the regulator removed I hooked up a bench PSU set to 5V with 300mA current limit to the -5V rail (Black to -5V, Red to GND, connected backwards to make a negative voltage as long as you use an isolated power supply). Something was still pulling a ton of current even though the power supply board was disconnected from the main board. Well, the only thing left was the 470u output capacitor. 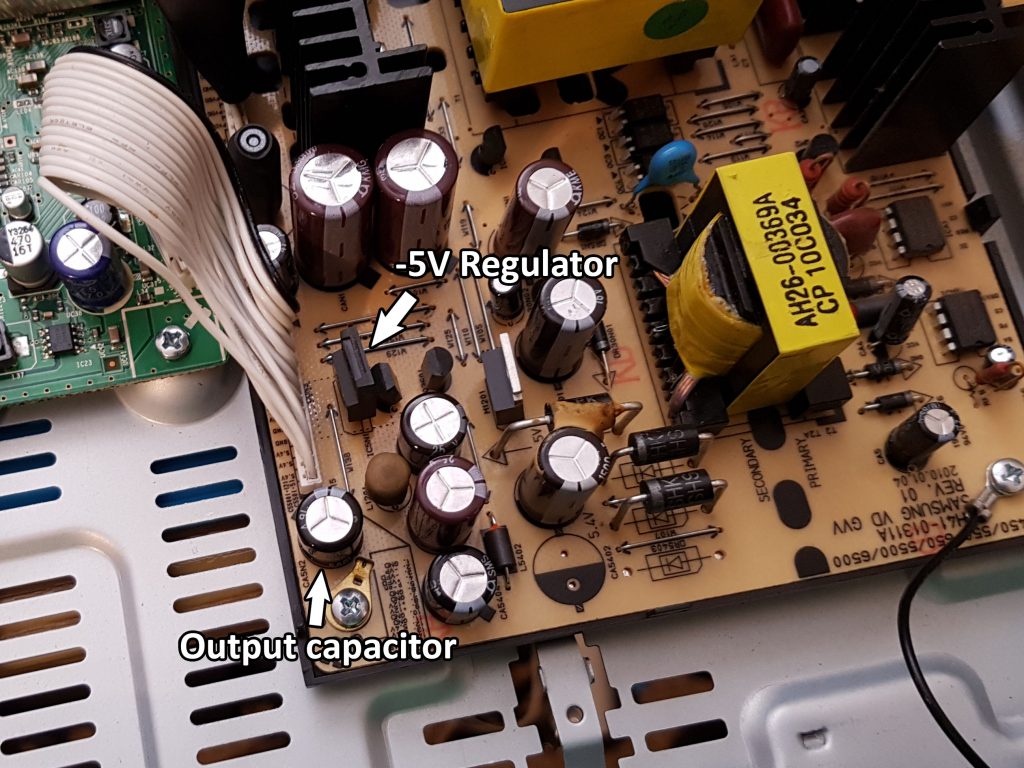 After removing the capacitor everything started working again! Probing the capacitor showed that it had an internal short-circuit, even though it looked physically fine with no bulging or leaks that would normally be typical signs of a failing electrolytic capacitor. 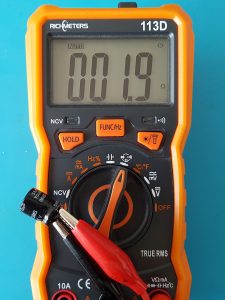 I ordered some new 470u 25V capacitors, replaced the bad capacitor as well as a few other 470u and 330u capacitors just in case. I also replaced the motor for the DVD disc tray since that had burnt out a long time ago. Good for a few more years of use! 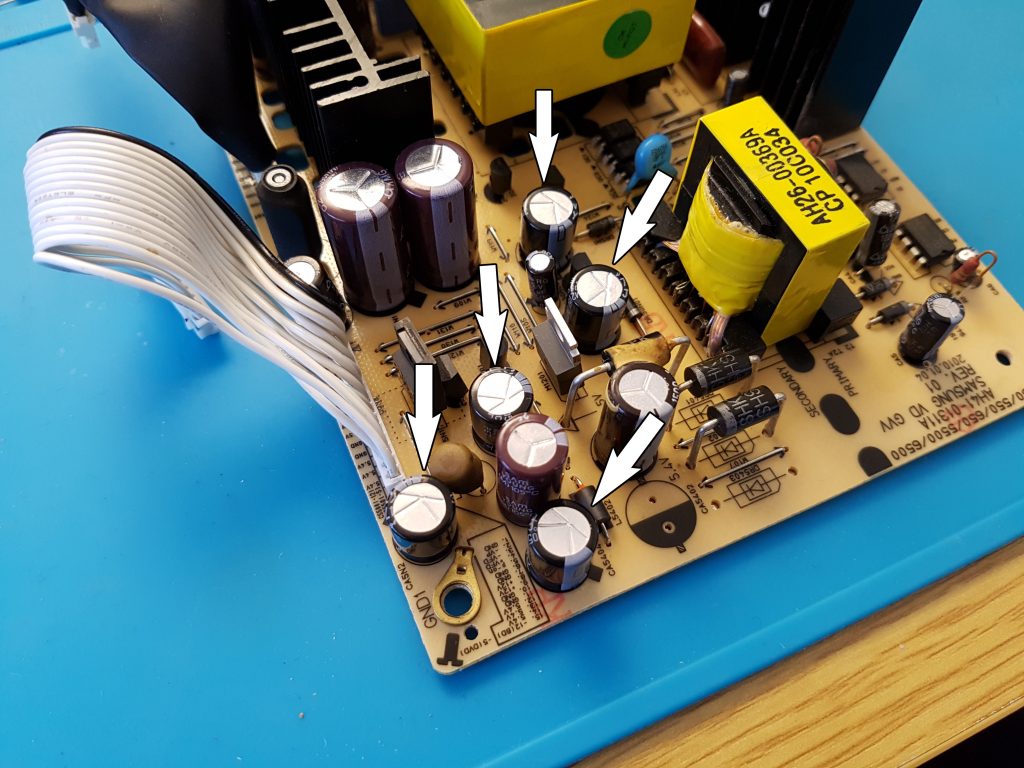 The capacitors that were replaced

Many years ago (September 2009) I made a simple bench power supply using an LT1083 7.5A linear regulator with adjustable output voltage designed to be used with a 19.5V 3.42A laptop power supply. I...

In case you’ve not heard of a joule thief before, they’re simple voltage boost circuits, usually used to drive light loads like LEDs with a single battery cell, even batteries that other electronic...