The main incentive behind this project was to see how much I could cram, in terms of both hardware and software, into a wristwatch-like device that is no larger than the display itself. An OLED display was chosen for being only 1.5mm thick and not requiring a backlight (each pixel produces its own light), but mostly because they look cool. The watch was originally going to have a 0.96″ display, but this proved too difficult to get all the things I wanted underneath it. Going up a size to 1.3″ was perfect. 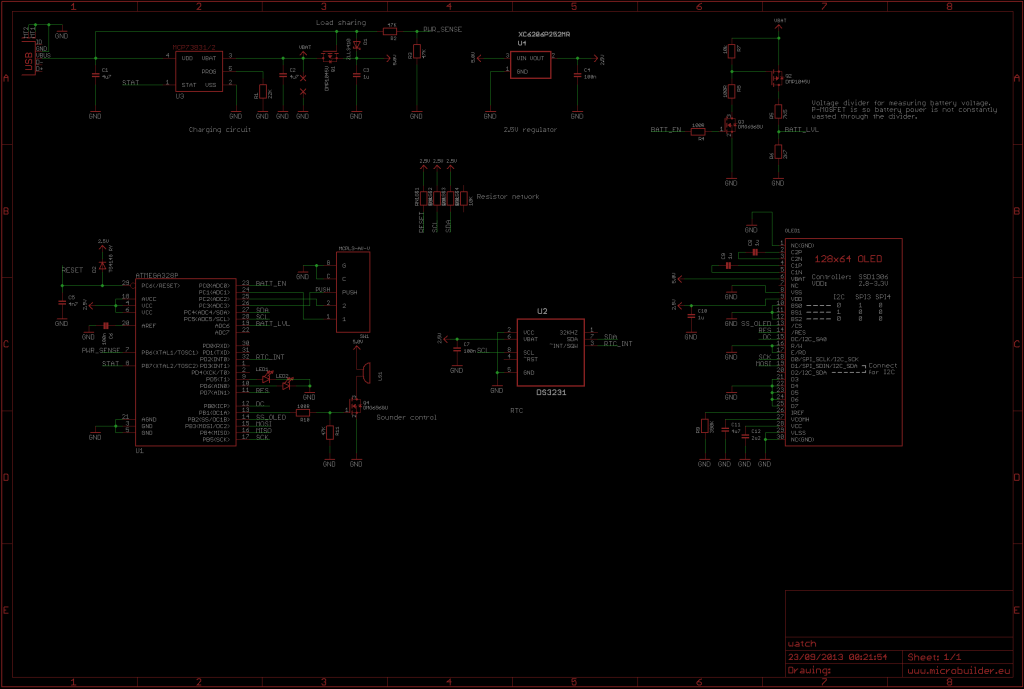 On the hardware side the watch contains an Atmel ATmega328P microcontroller, 2.5V regulator, Maxim DS3231M RTC, 1.3″ 128×64 monochrome OLED, 2 LEDs (red and green), a buzzer sounder, 3 way switch for navigation, powered by a 150mAh LiPo battery which can be charged via USB and 2 PCBs (though one PCB is just used as a raiser for the OLED).

The ATmega328P uses its internal 8MHz oscillator and runs on 2.5V from a linear regulator. Its current draw is around 1.5mA when active and 100nA in sleep mode.

The DS3231M RTC is an excellent chip, housed in a small 8 pin package which includes a built-in temperature compensated MEMS resonator with an accuracy of ±5ppm (± 2 minutes 40 seconds per year). Only a decoupling capacitor and a few extra pull-up resistors were required. The RTC is wired up so that instead of having power applied to the VCC pin, it’s applied to the Vbat pin which reduces its current draw from around 100uA down to 2.5uA.
Unfortunately this chip seems to be very hard to get hold of at a reasonable price if you’re not in the US. I had to get mine as samples.

The battery charging circuit uses a Microchip MCP73832 along with some additional components for load sharing, where the battery can charge without the rest of the watch interfering with it.

You might have noticed in the schematic that the LEDs are directly connected to the microcontroller without any resistors. The internal MOSFETs of the microcontroller have an on resistance of around 40Ω, so with a 2.5V supply voltage and LEDs with 2Vf, around 12.5mA ends up through the LEDs. I would have liked to have a blue LED, but the voltage drop for those are usually more than 3V which would have required some additional resistors and a MOSFET.

As the microcontroller is running on 2.5V the battery voltage needs to be brought down a bit to obtain an ADC reading. This is done by a simple voltage divider. However, with the voltage divider connected across the battery there would be a current of around 350uA constantly flowing through it, this is a huge waste of power. A P-MOSFET (and some voltage level conversion for it, which I forgot about in the first version so it was always stuck on) was added so the divider can be turned on only when needed.

So we’ve got a nice OLED display and 32KB of program space at our disposal, surely we can have more than just the time and date?

Almost everything is animated

A lot of time was spent optimizing the rendering code which, in short, involves copying bitmap images from flash to the frame buffer in RAM and sending the frame buffer over SPI to the OLED. The end result was being able to maintain 100+ FPS in almost all areas of the watch with an 8MHz AVR. However, since the animations are frame based instead of time based and to save power, the frame rate is limited to 60FPS.

Some of the main animated things: 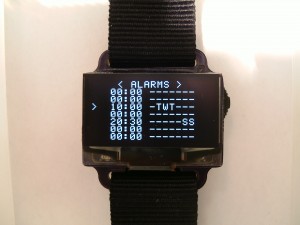 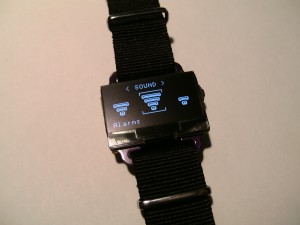 In ‘active’ mode the microcontroller tries to go into idle sleep as much a possible. In idle sleep the controller is woken each millisecond to see if anything needs to be updated, if not then it goes back to idle sleep, this usually takes less than 100us if the display doesn’t need to be updated. In this mode the current draw can be anywhere between 0.8mA and 2mA, depending on how long it takes to draw frames (fast frame draw time = more time in idle sleep).

If the watch is in active mode for an average of 1 minute per day (with a 5 second sleep timeout that would be checking the time 12 times a day) and all volume channels set to minimum the watch should last for around 1 year and 4 months on a single charge.

The first version had a few problems:

Out of 3 OLED displays, 2 died after a few minutes of being attached to the watch. One from Ebay and the other from AliExpress. I’m still not sure why they died, maybe just China quality? The one that worked was also from Ebay.

Water proof down to 0m!

This is a quick project I made to try out a 1.8″ colour LCD display from Ebay, the microcontroller code is very simple, after initializing the display it just waits for serial data and sends it str...

A newer version of the Bluetooth network monitor can be read about here, but I’d recommend carrying on reading this post first. Whenever I want to see why a download is going a little slow or gett...