This library offers quite a bit of flexibility: Optional use of interrupts, 2 of the connections to the module are optional since their states can also be accessed by the ICs status register, and supports basic collision avoidance.

NOTE: v3.0.0 of the library was released on 12th September 2017, the default CD pin has changed and the AM pin is now used by the library.

Some of the module pin names differ from the IC pin names in the datasheet:

The nRF905 is not 5V compatible, so some level conversions will need to be done with the Arduino outputs. A simple voltage divider or resistor and zener diode will do the trick. Only TXE, CE, PWR, SI, SCK and CSN pins need level conversion (not CD, AM, DR and SO). 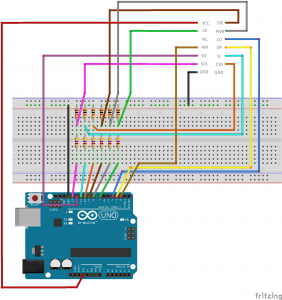 Searching for nRF905, PTR8000 and PTR8000+ should yield some results for modules on AliExpress, Ebay and DealExtreme. You should be able to get 2 for around £10.

Since v3.0.0 this library uses callbacks which are ran when events occur. If the option to use interrupts is enabled then the callbacks will run from the interrupt routine so be sure that any global variables you use in them are declared ‘volatile’, just as you would when dealing with normal ISRs. These events will wake the microcontroller if it is sleeping.

The actual air data-rate of nRF905 is 100Kbps, but the data is Manchester encoded which halves the throughput to 50Kbps. The modulation is GFSK with ±50KHz deviation. The radio also adds a few extra bits of data to the address and payload; a preamble and CRC.

The CRC is used to detect errors in the received data. Having a CRC doesn’t eliminate all bad packets, there is always a small chance of a bad packet passing the CRC. Using larger CRCs helps to reduce that chance.
When the CRC is set to 16 bit the radio uses the CRC16-CCITT-FALSE (0xFFFF) algorithm. I’m not sure what it uses for 8 bit CRCs.

Transmission time
The sizes of the address, payload and CRC can be adjusted for a balance between throughput and latency.

Transmission time can be worked out with:

tstartup is the time to switch mode as stated above (650us / 550us).
tpreamble is 200us for the 10 bit preamble.
Naddress, Npayload and NCRC are the address, payload and CRC sizes in bits.
BR is the bit rate which is 50,000.

For config 1, switching from standby to transmit:

A note to developers: Before v3.0.0 this library would load the address bytes in reverse order, keep that in mind if you’re using an old version of the library to interface with other radio systems!

This is a library for use with the Si4463 radio IC from Silicon Labs, used (or will soon be) in some of my projects. The Si4463 is configurable in a ton of different ways with options for modulatio...

This is a lightweight library for keeping track of time to millisecond accuracy, the data type for storing milliseconds can be easily configured, it supports ‘unsigned long long’ which can keep tra...

Getting Bluetooth modules talking to each other